Simply put, the term revolution just means to make a full rotation of 360 degrees, to end back around to where you started. This is what Kimbal Musk is doing with the food industry, or rather, the real food industry.

It doesn’t take a genius to understand that food, grown locally by your own neighbors is better for you than processed food that has travelled three times around the world. It also doesn’t take a genius to come up with the idea of urban agriculture, and seeing all the benefits it can have both on the human body, but also the environment. However, it does take a genius, or being part of the greatest entrepreneur family of our  time, to start investing time, effort and money into a brand-new concept that no one knows how will turn out. But I guess, this is yet another element of it all, when you’re taking part in a revolution.

Not just a fancy term

All it takes is a little dedication for our planet and future generations, being in possession of a couple of shipping-containers and a little patience, and before you know it you can eat green, tasty food that is good for you. If it only were that simple. The first thing needed is some understanding of the concept “real food”.

What is real food? Is it available to anyone and who can we trust to provide us with this? Real food has not earned its own definition in any dictionary yet, but Musk himself, other initiatives and people engaged to make the world a better place to live, do have the same notion of what it is – truly nourishing food for the producer, consumer, communities and Earth. It is a holistic term that incorporates “green-”, “local-”, “slow food” and so on. There are a few criteria that the food needs to achieve before it can be classified as real food. It needs to be ecological, local/community-based, fair and humane. In other words, a totally different reality needs to exits when compared to the reality of mass-produced food. This is something that Kimbal Musk, the younger brother Elon Musk, CEO of Tesla Inc., has set out to do. A revolution that can bring us back to the relationship we had to food before we started with mass-production, GMOs, dangerous fertilizers, unfair treatment of farmers and animals and destruction of our planet.

Rising from the “mud”

The fall of 2016, Kimbal Musk launched Square Roots. Prior to this, Musk has been involved in other real food projects, such as the Learning Garden and the Kitchen. Both of the latter nonprofit organizations focus on the small communities they are built in, by establishing relationships through a passion and fascination for food. The newest project however, involves the community on a whole new level. Young entrepreneurial leaders are given the opportunity of farming, through a 13-month program. Here they can develop their understanding of urban agriculture and local food system.

Tobias Peggs, CEO of Square Roots, explains that each entrepreneur has access to the equivalent of two acres of land. With exception that it is vertically-built and takes up less than 30 square meters. These mini-farms of Brooklyn, New York, have an all year-round controlled climate and are hydroponic. Hydroponic farms use a method of plant-growth without soil. This save up to 80% water compared to normal agricultural farming and allows for growth in all seasons. The food the farmers grow is non-GMO and uses special technology to facilitate vertical farming. A fantastic piece of engineering if you ask me.

This can make us wonder about the future as well. If we do have to leave our Earth at some point in the future, could this technology help us continue to grow food even in hostile environments? And can this technology be part of the answer for our own planet? Maybe we could be well on our way to fix our food-industry problems and the negative side-effects it produces.

It is fascinating hearing about these little farms and the impact this can have on the community. But what is the drive behind this initiative, what is so great about real food anyway? 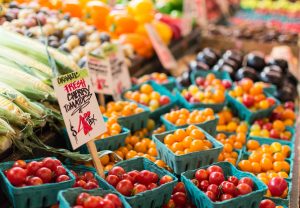 According to Kimbal Musk in the tv-series Couple Thinkers, the world produced enough calories to meet the needs of every human being in the 70’s. This was a result of the boom of mass-production of food. This kind of food might have been a good idea in the beginning, when the fight against stereotypical gender-roles finally started to give results. Women were not bound to their homes the same way they used to be, and started to go jet jobs the same way men did. However, the expectations of still having to be on top of it all at home led to a demand for quick meals and fast food. Fair enough (not the expectations, but the increasing demand). Then something happened. CEOs of fast food companies and processed food companies understood that there was real and big money to be made out of these industries, and once the ball started rolling there was no turning back.

Not only have these companies been a part of creating the new class-gap, slowly erasing the middle-class and leaving only the rich on one hand and the poor on the other, but they have also poisoned the population inside-out.

We have never in the history of time seen the type of health problems we encounter today. We are facing a catastrophe not because we have too little food, but because we have too much of it. The obesity epidemic is today a bigger crisis to our communities than malnourishment and hunger. In 2012 CNN reported the conclusions of a study made by the Institute of Health Metrics and Evaluation at the university of Washington. The report states that obesity has globally, with exception of the sub-Saharan countries, seen an increase of 82% the last two decades, and reported a 100% increase in the Middle East. The leading causes of years spent sick or injured are diabetes, strokes and heart diseases. This is because research and technological advances has made it possible to save people from death after the occurrence of strokes and heart attacks, but the aftermath is that these people go on living disabled for years.

Can the good-guys win?

Many have tried to predict what our outcome will be in 50, 100 or 500 years. Some are deeply pessimistic and conclude that we have passed the point of no return. Others still think we can make a change. Kimbal Musk is one of them.

Square Roots is not only an uplifting story for Brooklyn, but a story for all of us to take home. The kind of reward the young entrepreneurs get from taking part in Square Roots in beyond compare. These people will go on to thrive with knowledge that few others are equipped with. This is something we as students or young people in the starting phase of our careers, can be a part of – not necessarily having first-hand experience with urban farming, but having knowledge of how to create sustainable future. No matter the industry, sustainability is, and will be, the key for the future. Everyone has to take part if we want to be part of the new age.