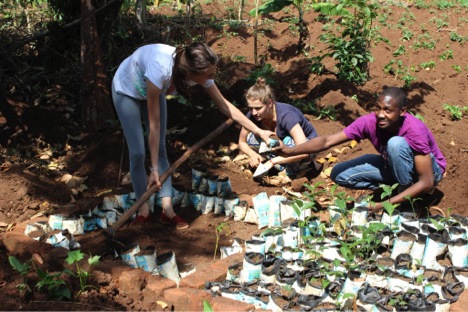 Thursday night 2 a.m. the music plays loud from the joint around the corner. After the dancing and praising of the Born Again Community next door had stopped in the evening the night life started. Singing and dancing almost the entire day and night, Kamwokya is a very lively place that undergoes constant change due to its proximity to down town Kampala, the capital city of Uganda.

With roughly 1.6 Million people Kampala is the biggest city of the country and its social, economical and political magnet. With its green grasslands and banana plantations Uganda is located at the strategically important source of the Nile, the Lake Victoria, which supplies the downstream countries South Sudan, Sudan and Egypt with water. It is a formal presidential democracy which has not seen a new president since 1986. In the past years attention has been drawn to the country through the controversial Kony 2012 campaign. A one-man hunt campaign initiated by an American activist targeting Kony, the leader of the LRA (Lord Resistance Army), a rebel group destabilising the countries North for more than a decade. The country is faced by challenges such as internal social and economical problems and its localisation in an unstable region, with neighbours South Sudan and DRC-Congo.

In 2009, I was working as a volunteer in North Uganda, I met a young man from Kamwokya. He invited me graciously to this vibrant part of Kampala and I stayed for a week at his parents’ home. By then Kamwokya counted maybe one or two multi-storage buildings and one finger was enough to count the tarmaced roads. Even though now more roads have been tarmaced and the real estate boom has brought many rental houses to the area the structures and problems of the people as you slop down from the main-road have remained more or less the same. The drainage system is not sufficient and at those ends where it could actually hold the tropical rainfalls it is usually blocked with rubbish. The local authority responsible for the rubbish collection drops by once in a while and only if you are lucky, which means you are at home by then and live closely enough to the main-road, you will be able to dump your rubbish in the overloaded lorry. That such a drainage and rubbish situation leads to health issues does not need a deeper analysis, it becomes evident the moment you pass through the tiny path ways and look around. The stagnant water provides a perfect home for anopheles mosquitoes to breed; hence malaria becomes a permanent partner in people’s life in Kamwokya. The income levels in this area are low and building space is a rarity, yet increasing urbanisation pushes more and more people from the villages into towns. Here they hope to find a better life and a job, but only few can earn a decent living. Administrative failure, mismanagement and overpopulation are some of the reasons why Kamwokya counts among the poorest areas of Kampala city. Facing this reality and seeing the daily life struggle people in Kamwokya go through, the story of the young men I met five years ago who was born and raised in this place sounds like a fairytale. A person achieving what he achieved, out of what he had (or better what he did not have), must be gifted with enormous compassion, faith and a strong will.

Charles Batte on his road to success

By the time we met in 2009 he introduced himself: “Hello, I am Charles Batte, a medical student of Makerere University.” Now, five years later one sentence would not be enough for him to introduce himself properly. 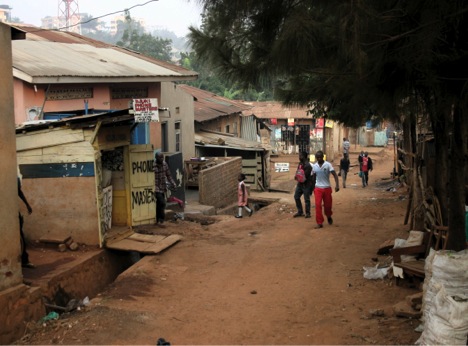 Street view of Kamwokya: The Street in which Charles Batte grew up. Photo: Julia Seifert

As it turned out I met one of the brightest students in Uganda, being at University on governmental scholarship due to his extraordinary performance in his final high school years. One year after our first encounter he campaigned for the post of the guild president, highest student representative, at Makerere University. With Makerere being one of the well known and oldest Universities in Sub-Saharan Africa this post as the highest student representative is not only prestigious but also highly political relevant. Even though, he lost the election by ten votes people around Makerere Hill would recognise him and tell him about their concerns. This loss did not hold him back to strive for more and even bigger targets. With the profits out of his small scale farming activities in Katiiti village, where his parents used to stay before moving to Kampala in the late 1970s, he build up a Community Health Center in Kampala in 2011. One year later he won the World Merit Global Ambassador social Entrepreneurship award in competition with over 60,000 others from 221 countries. This award enabled him to travel, volunteer and inspire young people in over 17 countries around the globe. The following year he was named a 2013 Global Laureate fellow by the International Youth foundation.

His Fight against Climate Change

Earlier in 2012 he started an NGO called Tree Adoption Uganda (TAU) which epitomises the ideology of thinking globally and acting locally. TAU is an innovative social enterprise that uses reforestation and the fight against climate change as a means of fostering economic development in communities in Uganda. The organisation welcomes volunteers from around the globe to sensitise people in rural areas about climate change as well as deforestation and plants fruit trees to work against the environmental degradation. As such TAU does not only fight climate change but provides income generating activities to people in rural areas as well as counters rural-urban migration. As a high school student Charles Batte developed a concept for a Self-Sustaining Community, now he is realising that in the village of Katiiti in central Uganda, roughly 85 km away from the boom town Kampala. His parents, who have supported him with all their love and have given him the strength a person undergoing such a carrier needs, have now even decided to move back to the flourishing village, which they once left for Kampala to provide their children with a bright future. Charles Batte is an inspiring young man, who established a farm and educational center in his parents’ village, a Community Health Center in Kampala, an NGO fighting climate change and is completing his medical degree. At the age of 26 he has achieved which some of us can only dream about and Charles is still aiming higher. Whatever the future brings for him I am sure he can achieve anything he longs for, as a young charismatic leader who is able to transform his society in a better one.

Charles Batte is a role model for his and upcoming generations of Kamwokya and other poor places in Kampala city. Even though, Kamwokya has not much to offer economically and it still has a long way to go to transform itself into an attractive and well established living space, the people living there can make a change for themselves.