Could social democracy have saved Detroit? 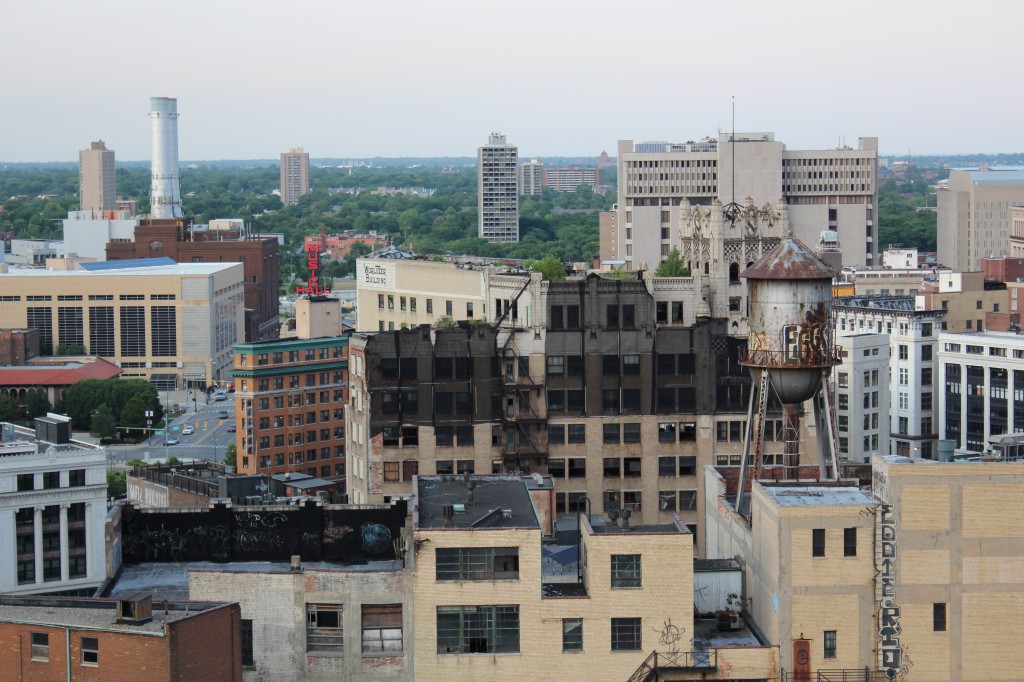 The fall of Motown might be a glimpse of the future for other American cities,
if nothing is learnt. Foto: Ann Millspaugh/Flickr Creative Commons

As the factories stand empty and buildings tower in decay, an outsider would almost
assume they had been abducted and brought to a post-apocalyptic city. Long gone are the
kitsch of Motown, and the production of the Motor City. On the 18th of July, Detroit,
Michigan filed for the largest municipal bankruptcy – a debt of $18 billion – in the
history of the United States. The apocalypse was recognized.

The filing came as somewhat of a cosmic joke, confirming what everyone in the city had
known for a long time: Detroit had been lying cold on the table for years. The bankruptcy
was merely the identification of a body. The city is an emblem of what once made the
United States an innovating country in both manufacturing and social mobility. Journalist
and Detroit native Charlie LeDuff writes in his eulogy for the city, Detroit: An American
Autopsy, “[…] I believe that Detroit is America’s city. It was the vanguard of our way up,
just as it is the vanguard of our way down.” As the home of the American auto industry,
the city crafted the concept and aspirations of the American Dream.

Henry Fords Social Policies
In 1914, Henry Ford summoned reporters to his Highland Park, Michigan factory to
introduce the Ford motor company’s new employment policies. His statement was that of
social democratic enchantment. Ford announced that the employee workday would be
reduced from nine hour to eight hours, while expanding operations from two shifts per
day to three in order to create more jobs. His third announcement left the state of big
business enterprise aghast: Ford would double the rate of pay to $5 per day. This meant
that assembly line employees could afford to purchase the cars they produced. Ford said
of the decision, “We believe in making 20,000 men prosperous and contented rather than
follow the plan of making a few slave drivers in our establishment millionaires.”

Ford’s vision is now a vapid reminder of what Detroit has lost. According to LeDuff, “A
newly hired autoworker will earn $14 an hour. This, adjusted for inflation, is three cents
less than what Henry Ford was paying in 1914 when he announced the $5 day.” The
cataclysmic fall from glory begs the question, if principles of social democracy helped
build this once prosperous city, could it have saved it from itself?

Change in demographics
At its peak in 1950, Detroit was the fourth largest city in the United States, home to
nearly 1.9 million people. Today, the fledgling city is home to 700,000 residents, making
it the first city to fall below one million residents after once eclipsing the mark. In 1950,
the city was 80% Caucasian while today it is 80% African American. The city’s
population began to shrink in the 1950’s as the decade witnessed the beginning of “white
flight.” The African American uprising, the Detroit Riot in the summer of 1967, catalyzedhis movement, as affluent white families, fled the city in droves. According to a Rutgers University database of the many causes of the Detroit Riot, 67Riots, one in particular was economic disparity. Automakers Ford, Chrysler, and General Motors began automating their assembly lines while simultaneously outsourcing the production of parts. Job discrimination barred African Americans from positions of seniority, and subjugated others to disposable labor.

A diminished tax base, now made up of a demographic with statistically less earning and
spending power, is now charged with maintaining a 139-square-mile city. This coupled
with the exodus of the auto industry and outsourcing of jobs debilitated the city’s private
sector. Act II for Detroit was the tragedy of the public sector.

Corrupt Politicians
Municipal mismanagement and corrupt politicians bled the city of millions of taxpayer
dollars. Ex-Detroit Mayor Kwame K. Kilpatrick currently awaits a bed in Federal Prison
following a conviction on charges of extortion, racketeering and bribery. During his trial,
disclosures had been made suggesting Kilpatrick used nonprofit and state grant funds to
finance his personal expenses. As the politicians exhausted the city of its dignity, Detroit
accumulated a debt far surpassing that of the next closest municipality by nearly $14
billion.

According to a recent New York Times article, of Detroit’s $18 billion debt, nearly $7
billion is secured by collateral such as utility taxes and casino revenues. Of the remaining
$11 billion in unsecured debt, $9 billion is owed to retirees and current municipal
workers. The $3.5 billion shortfall in the city pension fund has become a source of
contention for unions and Kevin D. Orr, the state appointed money manager for the
duration of the bankruptcy proceeding. Orr has proposed “significant cuts” to the city
pension program, however this is legally murky territory. The various public unions argue
that pensions are protected under the Michigan State Constitution as contractual
obligations, which “shall not be diminished or impaired.”

So now what?
In a city where two thirds of the ambulance fleet is broken on the average day, 40% of the
traffic lights do not work, more than half of the parks have closed, and firefighters and
police officers use equipment that has long passed date of expiration, the only thing that
distinguishes Detroit from Baghdad is a lakefront location. Irresponsibility and greed in
the private and public sector cannibalized one another until all that was left was a carcass
of an American city.

The issues of Detroit speak to a larger structural issue in the United States. Income
inequality has been institutionalized to a degree by which wealth is a birthright and
poverty is an unrepentant affliction. According to Stephen Richter, publisher of the online
magazine The Globalist, the average compensation of an American C.E.O. is now 250
times the average compensation of a production worker. This is an issue of citizenship
and civic duty. Henry Ford’s vision for his company was an existential mission statement
to the private and public sector. His policy expressed collaboration between citizen and unicipality. To Ford, the cost of doing business was giving employees the power to earnand then produce revenues for their communities. In return, the communities would provide services for its citizens.

Saved by Social Democracy?
Although social democracy is unfeasible in the United States, it is a system that could
have prevented Detroit from becoming the emotive story that it is today. Social
democracy cannot fully account for racial tensions and civic corruption, but it could
regulate the practices of the auto industry to promote the tripartite system of enterprise by
which employee, employer and government work cooperatively to advance the interests
of all parties involved. According to the Brookings Institute, a Washington, D.C. based
think tank, Detroit owes $6.4 billion in other post-employment benefits (OPEB), which is
comprised of unfunded obligations to pay healthcare costs. Detroit’s large private
automakers have a similar problem. The institution of a state run healthcare system would
relieve the municipality and the businesses that reside within the city limits of billions of
dollars of debt.

Detroit’s narrative speaks to the fiber of the United States at the moment. Nobel Prize
winning economist Joseph E. Stiglitz wrote in an opinion letter to the New York Times,
“Detroit’s bankruptcy is a reminder of how divided our society has become and how
much has to be done to heal the wounds. And it provides an important warning to those
living in today’s boomtowns: it could happen to you.” It is a stark proposition. According
to the credit rating agency, Moody’s, the unfunded liabilities for Illinois’s three largest
state-run pension plans to be $133 billion. That is a Detroit bankruptcy six times over.

So for now, Detroit is an American experiment. With other U.S. cities in debt, the
studying eyes of mayors and governors watch what can be done with a clean balance
sheet. How Detroit responds may have reverberations throughout the country. Municipal
managers ask plainly: what policies can save the great American city? It is a prudent
question. Without radical shift in social and political debate, Detroit’s nightmare could
become another city’s reality.