Fuck for the BIAŁOWIEŻA Forest – or don’t

Life. It is not always clear what the right thing to do is. So in those few cases when the shades of grey get parted into pure white and pitch black, please, do the right thing. Do something.

In 2012, a Polish guy called Michał Marczak did this documentary called Fuck for Forest. At that time, I was living in Volda and enjoying its multiple cultural festivals, one of them being Dokfilm, a festival for Norwegian documentary films. By “Norwegian” they also mean Norwegian-financed, so the stories and creators come from all over the world and the artistic level is quite high. Marczak’s film had its Norwegian premiere there.

What Berlin has probably seen

Fuck for Forest takes the name and tells the story of a non-profit org that was founded in Norway. For those of you who are not Norwegian and don’t find this story as old as gamalost: FFF uses a membership-based porn website to collect money for “ecological projects” and “nature protection”; so yeah, basically they fuck for forest since 2004. Turns out, it’s not as easy as mother nature intended it. They performed a sexual act in public and got fined. Then, they simulated performing it and got fined again. It seemed like the problem was the prude Norwegian legislation, defining everything as sexually offensive and getting you arrested for following nature. Norway, where pretending to have sex during a mass is frowned upon, was not a welcoming place for FFF’s founders. So, they moved to Berlin, a city where there was nothing people had not seen. Were they the first ones to lick sperm mixed with blood of their fingers there? Probably not, but hey, nice try.

It’s not like I don’t look forward to seeing a stranger’s penis. Except that it is, actually. Under pretty much no circumstances do I enjoy watching a random penis, at any time. That is why clicking on the FFF page was a sacrifice. Professional as I am, I handled it as an adult and was surprised by the low density of naked body parts displayed on my screen. All this happening in the quiet innocence of the Sophus Bugges library (apologies to all those who were unfortunate enough to walk pass me).

I didn’t find out much. According to the webpage, between 2006 and 2013 the organization collected almost 5 million kroner. Some of it they spent on buying up land and creating private nature reserves, for example in Slovakia. In 2014 the founding Norwegians started a ranch in the Mexican mountains. It’s meant to be a “creative activist center (…) open for nudists and lovers alike”. They call it the rotting Garden of Eden replica. That’s become their only project. Have you seen that DiCaprio-movie about a hidden island hippie town? The blog entry from January is titled “a comeback from the dead”. Apparently, there had been some kind of break up in the FFF Berlin ranks that caused a lot of hardship for the original founders.

Better sex than nothing

You might, just as I am, be ambivalent about organizations like FFF. Perhaps they do more harm than good, perpetuating the seditious activist stereotype. I wouldn’t have sex on a stage during a music concert, neither would I want to be in the audience while someone else was doing it. But, at least they are doing something. Because whether you think about it or not, the forests are being destroyed and doing something – may it be fucking – to stop it is better than doing nothing. 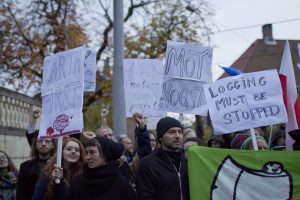 That is why I went out in the cold on a late October afternoon, just before the daylight-saving time end. You see, my country of origin misread the FuckForForest message and reinterpreted it so that the next Marczak’s documentary could as well be called Fuck the Forest, starring Poland. We have now a so-called “situation” that goes like this: Some time ago, due to a bark beetle outbreak in the spruce population, an “active management” by harvesting has been imposed onto the primeval Białowieża Forest’s protected area and logging has increased threefold.

This forest is an UNESCO heritage site shared by Poland, Belarus and Ukraine. The environmentalists and scientists warn that the policy of the Ministry of the Environment (sic!) towards the Białowieża Forest is an unnecessary and risky disturbance into an ancient ecosystem. It was this human involvement – planting too much spruce where it didn’t originally belong – that brought troubles in the first place. Some fear that Polish Forests are using the bark beetle outbreak as an excuse to extract precious oak timber, highly demanded by the market. The answer from the Ministry official webpage is: WE WILL SEE WHO IS RIGHT. To call the whole situation an international scandal would be to apply a euphemism.

I am not a proper activist. I am not a member, I do not share campaign stuff on my social media and I am not 20 anymore. I have acquired a certain dose of scepticism mixed gracefully with a healthy drop of misanthropy in proportions that allow me to function in the society. But a government logging down the oldest forest in Europe while calling it protection is more than just outraging, it is surreal. No one should stand for this. Last summer both UNESCO and the Court of Justice of EU objected the Polish Minister of the Environment, Jan Szyszko. Poland was to stop the logging immediately. Twice Szyszko had to take the trip to Luxemburg and explain himself to the Court. But he did not comply, so now the most important juridical body of the EU has to (for the first time in its history) decide how to punish a member state that simply would not honour its verdict.

Late October I got a message from a Polish friend about a demonstration outside of the Polish embassy in Oslo. A group of friends were going to demand that the logging should cease immediately, and the Minister should resign. The Facebook event said “Defend Białowieża Forest” and there was 30 people attending, 100 interested. “Too few”, I thought and clicked “attending”.

Having followed all that scandalous doings from across the Baltic Sea, some Poles living in Norway decided to gather on the side of Bydøy allé, where both the passing drivers and perhaps also chargé d’affaires of the Embassy, Marian Siemakowicz could see them (Poland does not currently have an ambassador in Norway). Some hastily-made signs were passed around. Almost no one made it on time, except an old Norwegian couple who came first. They were worried about the organizational side of the protest: Was it reported? Is someone from the Embassy coming to talk to us? Are we going to give a formal letter to the ambassador? Trying to answer in Norwegian, I got distracted by the size of the gap between Norwegians and Poles when it comes to trusting the authorities. I felt almost sorry for them, seeing their disappointment, but also sorry for myself, for always having felt so powerless against those with power in Poland.

Whether you think about it or not, the forests are being destroyed

Eventually, more people joined us. I was asked to read a short text in English about the situation in the forest. It was not easy to read, let alone understand it being read through a megaphone on a noisy street. Other speakers had to pause sometimes to figure out the pronunciation of some of the most difficult, technical terms. The fliers in Norwegian had many mistakes. One of the signs saying, “stop illegal logging” was cut out so that it said “stop llegal logging” instead. Yes, it was clumsy.

But we showed up and we stood against something so clearly wrong and stupid, and tragic. We showed our support for those in Białowieża Forest, activists and local people, who try to slow down the devastation. We shouted, and we froze our asses off and, eventually, some of us had to talk to the police. “This is an illegal protest”, said the policeman. In the end he let us go free. I don’t think he would have done that if we were fucking for the Białowieża forest in the middle of Bygdøy allé. But if we were, maybe NRK would have accepted our invitation. Hard to tell.