The more uncertain the future becomes, the more obsessed we become with it. This article represents a travel in time, through time and outside of time. From antiquity, to the age of reason, to science fiction, to quantum physics. That is the trail to the past through paths of the future.

The pressing need to know (Kn times P), the fear of the unknown (UKn times F), the uncertainty of choice (C/Ucer) and the torment of the road not taken (tor) make up for pretty much everything that it means to be a human being (H). Do the math.

This attempt at pseudoscience is not random, for we shall now look at the first act where the future and humans conflict: clairvoyance. Meaning “clear vision”, the concept refers to the paranormal ability of seeing things which are distant in time or space.  Extrasensory perception, telepathy, precognition are just some of the names used to describe this concept.

Normally, to find out what the future will bring, one had to go to ask the oracle. Although you might think that in order to do so today you need to travel back in time or take the red pill from Morpheus, you’re wrong. There are few of them in India, many in Nigeria, another three in the service of Dalai Lama. Even though not all of the Tibetan oracles remained active in exile, those who did, like Nechung Oracle, still serve as advisers to the government and the whole nation. They do predict truce with China and the return of the Dalai Lama to Lhasa. There is no better way to encourage your people’s positive thinking than a good message from the Gods. On the other hand, consulting political decisions with an oracle became the fuel for those of the Tibetans who oppose the peaceful course of their country.

And that is the problem with oracles. Being mere channels, receivers of the divine will, their visions are being interpreted by others. That makes prophecy a powerful tool of manipulation. Not only Buddhism has them, almost every religion does. The ancient Greeks had the Sibyls, and as the story of Oedipus tells us, their prophecies could not be avoided. People were slaves of their fate. The Old Testament is also filled with its own kind of oracles called prophets, however it is the New Testament’s Apocalypse, The Book of Revelation, that is perhaps the most known prophecy of all time, along the messianic prophecy.

It falls into the category of eschatology, which is every religion’s own version of how the world will end. Now, disagreements of eschatological nature, or rather over interpretations of that prophecy, has made the political world shake several times. The Protestant Reformers claimed that the Antichrist was the Pope and the Catholic Church was the Babylon, making their case so clear that they basically scared thousands of believers away from its concurrent. This massive PR crisis made the Catholic Church come up with another theory. Reading about these theological nuances would make anyone truly understand why there were no resources left for real science.

Long story short, up until that moment, the Church said that as long as it is ruling, so is Jesus, and all is good. The moment it will start losing power, the Second Coming is being launched with the judgment and the resurrections, and the massive metaphysical north and south migration. However, the terrible passages of the Revelation have already happened or are to be meant symbolically. In order to protect the Pope’s good name, a new version was brought up: the Rapture is going to happen in the future, and very literally, with the coming of Antichrist and the annihilation of the disbelievers. So you see, said the Jesuits, the Pope can’t be the Antichrist because the world obviously isn’t ending. Problem solved.

Since then, this new interpretation has fuelled several religious groups, sects and other currents like apocalypticism and a range of quite secular conspiracy theories. When exactly the world will end, is a subject of constant calculation which appears to attempt to have a dose of credibility. The older the source and the more precise date – the bigger the disappointment. For those unpleased with surviving the year 2000 without a scratch, the Mayan Long Count calendar seemed to be the next big hope. Now what? Maybe waiting for Newton’s 2060 prediction to come true is not a bad idea. But why wait to find out if you can know now?

«Your life-changing horoscope seems to be just a few clicks away. How exciting.» 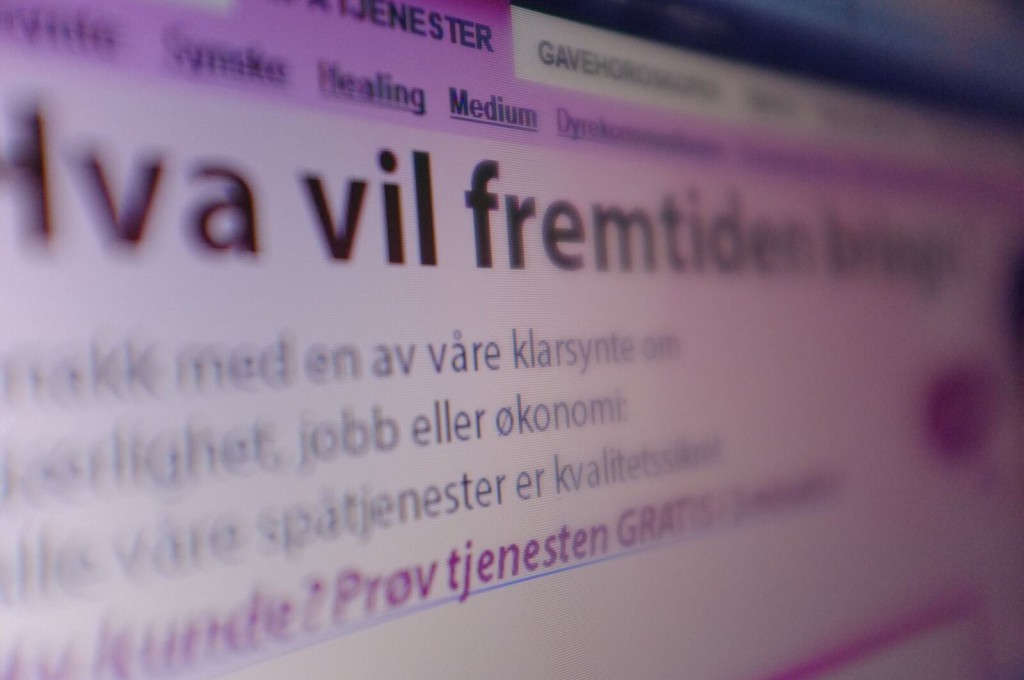 In future we trust

There are 16 results on 180.no for “spådom Oslo” (“fortune telling Oslo”), which shows a clear demand. For what, one might ask. Love and money are the two primary fields of interest. Your life-changing horoscope seems to be just a few clicks away. How exciting. However, the list doesn’t end there. “Did you know that fertility problems can be solved by magic?”. Your cat went missing? It can be as easily found. But the most disturbing is perhaps the explicit offers about curing disease, or contacting loved ones who had passed away.

What’s interesting is that while the companies’ owners are male, the profession itself is (still) almost entirely occupied by women. And not just any women. True, most of them have names and pictures that would easily make them fit the Ullevål Hageby resident profile. Not comfortable with that? Try Santara, Rahilii, Luna or Nikita. And it is fine to call them fortune-tellers, soothsayers, forecasters, even mediums. However, some tend to describe themselves as “conversational therapists”, “life coaches”, “guides”, “healers”, “teachers”. All want to help.

The forecaster often operates through telephone, for a little less than 35 NOK per minute (invoice costs not included). To get an answer via e-mail (within 24 hours) costs 398 NOK. How liberating, to be able to find out that you actually will pass the exam. In that sense, the phone call could save you a lot of time otherwise wasted on reading. Indeed, this is the opium of fortune telling – the transition of responsibility for your own decision, for your own life.

But there must be balance in the universe. Since religion claims to know the future, science had to catch up, and so it did. Trying to find a greater patterns in social change and make systematic predictions for the future is called ‘futures studies’. Based on observation and analysis of the past, Gordon E. Moore, the co-founder of Intel, was able to predict that the number of transistors in a CPU will double every two years. What became known as the Moore’s law is an example of futures studies, although it does have an expiry date coming very soon. Probabilities about multiple futures are really all we can expect, but underlying just this – that there is no future, but many, is crucial. Another name for futures studies is strategic foresight, which perhaps sounds slightly more grounded and thus can be associated with creating the business of predicting the unpredictable. At the World Economic Forum the strategic foresight is quite important in helping to create scenarios for the so-called ‘global shifts’, crucial changes that will define the world of tomorrow.

The truth is though, it is extremely difficult to know even a part of it in a long run. Every meteorologist will tell you that. The number of variants, factors and interactions is simply too incomprehensible. But rather than accepting it, humans put another force at work: supercomputers. Every now and then you’ll hear about those crossing yet another veil of the future mysteries. The latest one performs speedier diagnosis and can predict with 96% accuracy when the patient is “facing a high probability of dying”. But it can’t predict if the same patient will fall under a truck the next morning. Case closed.

« People were slaves of their fate.»

Or is it? Let’s conclude with a twist. The past shapes the future, correct? Of course if you read “The Secret” or its much better predecessor “Thoughts are Things” by Prentice Mulford, you may claim that it is your mind that shapes your life since the Universe is reflecting it and giving you no less than what you yourself want to get. That’s another way of looking at it. But what if we were all forced to look differently at future, and time, by a team of Australian quantum physicists?

The Double Slit Experiment is what we all learned about in high school. It was that thing with a screen with two narrow slits and a laser. This simple experiment shows something crucial for the whole field, that is the wave-particle duality. Photons were used first, but also electrons act like that. When sent towards the slits they proceed pass both of them simultaneously, like a wave would do, but then by the time they hit the screen they are still a single particle. More of them will follow and all the particles on the screen will form a interference pattern, typical for waves. You may say that the particle is carried by the wave, kinda. However, if someone tries to measure the path of the quantum object, it all changes. It will choose its state and act as a wave or a particle. Even though we know that it’s both, it was never observed as both. What the scientists didn’t know is when exactly does a photon or electron change its mind, but they knew how to check it.

It is called the delayed choice quantum eraser experiment, and it sounds as abstract to most of us as it actually was to the quantum physicists. But lately it seems that some of them in Australia managed to facilitate the experiment and thus outsmart quantum objects! Well, not really. Instead, the quantum objects made them drop their jaws with a wham. A helium atom was used, still small enough to act schizophrenically. The second grate was placed randomly and only after the atom passed the first one.

The result was a helium atom passing through the single grate like a particle, on one path. Where there were two grates, it passed on many paths like a wave through the second one. That means the atom ‘knew’ whether there will be a second grate or not, somehow. The future of the grate being there shaped the past of the atom’s defined state. Time ran the opposite way, the thought experiment was confirmed. It would have been the right moment to quote Einstein on quantum physics: “spooky”.

There you have it. Future is a mystery, it doesn’t follow rules and it laughs at our desperate attempts to define it, predict it or even just measure it. We might as well just relax and enjoy the ride.