This commentary is not about Norwegian fast-food. However, I guess you could compare me to a Grandiosa pizza. You may think Grandiosa is Norwegian, just as most people think I am Norwegian. The truth about Grandiosa is that the wheat flour used for the dough is shipped from the Norwegian countryside, the paprika comes from Spain and the pineapple from Costa Rica. Appearances may deceive. Like the «Grandis», I am similarly international. I have lived in four different countries, consider myself fully trilingual, have a Norwegian mother and a Mexican father. When I tell people my life story I receive comments like: «How lucky you are», «Så spennende!» or «Kult!». Although my story may sound interesting on the surface, it is more complex than that. Moving around my whole life has led me to never feeling at home in one country and not fully belonging to one culture. My home is not bound to a fixed geographical place but spread in small puzzle pieces around the globe. 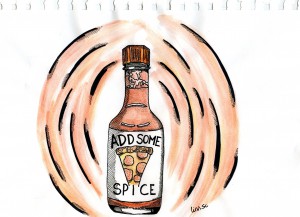 Moving from country to country has led me to take one of two choices: to stick with my own norms and habits or to adapt to those of the local culture. The first option is safe and requires less effort. The second option requires a greater risk: to step out of my comfort zone. Although I do not have a place I can call «home», where all my friends are family are, I have learned valuable lessons along the way. Tolerance, adaptability and flexibility have allowed me to make a home out of every place I live in. I have consistently been forced to mold to the local culture by stepping out my comfort zone.

Nearing the end of my Bachelor’s degree at the University of Oslo, I have learned that taking advantage of student life in Oslo is much more than reading, going to classes and taking exams. What has motivated me to stay at UiO and take another Bachelor and Master degree, are the activities outside of classes. The flourishing community of engaged students organizing themselves and putting their academic knowledge into practice, along with the friendships I have made are what motivates me to get out of bed in the morning.

Engaging myself has led me to finding my niche and sense of belonging at UiO. I wish that everybody could have the same positive experience. Sadly this is not the case. Not everyone receives the information in order to engage themselves, and not everybody is able to find a society for them. Most disappointingly, not everybody is welcome…

Internationalization at the university

If there is any arena in society that would reap most benefits from internationalization, it is higher education. The world is becoming increasingly globalized through the interdependence of economic, cultural and knowledge spheres. People are increasingly mobile. As a result of globalization, 13% of the student population at the University of Oslo is from foreign countries. While 17.5% percent of the academic staff and 26% of PhD candidates come from abroad.

In the broadest sense of the term, academia refers to the community of scholars and students in higher education perusing the accumulation of knowledge. Should the pursuit of knowledge be restricted to national borders and concerns? Wouldn’t the exclusion of foreign students hinder the overarching goal of academia, namely the pursuit of knowledge? Shouldn’t international perspectives and global concerns be integrated in academically centered activities of student organizations? Should academia restrict itself to national borders at all? Aren’t local Norwegian students also part of a global world?

What about local internationalization?

Internationalization, according to Jane Knight in the Journal of International Higher Education (2003), refers to integrating an international, intercultural and global dimension into the purpose, functions, organizations and delivery of higher education.

Moreover, the international perspective concerns a mutual point of interest for both national and foreign students. It is a symbiosis of cross cultural exchange: a give and take for both parts.

A prerequisite for incorporating internationalization in the organizations and policies at UiO is having integration as a goal. It is about cultivating an environment that does not exclude; that welcomes and sees people as equal. The pursuit of knowledge at academic level is hindered if students with other cultural and language backgrounds are excluded. International students that are looked over with a blind eye are untapped local resources.

Norway’s education minister Torbjørn Røe Isaksens speech at the Research Association’s annual seminar, last November, expressed that internationalization should not be a goal, but a tool to achieve higher quality in education. The question is how toachieve internationalization, not whether it should be achieved. Røe Isaksen asks if we have good enough incentives for foreign researchers to establish themselves in Norway. An article from Universitas in March this year reveals that half of foreign PhD students leave the country after completing their degree. Perhaps the economic incentives to stay are not enough…

(..) internationalization of academia does not begin by crossing oceans. It begins by using the international resources that exist locally (..)

The education minister speaks of cooperating with universities across national borders on research. However, I believe that the education minister is missing a critical point: internationalization of academia does not begin by crossing oceans. It begins by using the international resources that exist locally: the scholars and students that are present at the University of Oslo. This human capital is in certain contexts ignored and forgotten. As the Center for Internationalization of Education, run by the Ministry of Education and Research, phrases it – «internasjonalisering heime».

I have first-hand experience with two student-run organizations that actively work for «internasjonalisering heime», or local internationalization, in their activities. The Latin-American association at UiO holds its meetings and activities in English. If otherwise, the language is specified on information material. Seminars, movie screenings, debates and informal language cafés mix academic and social aspects. Students of different language backgrounds and disciplines meet and talk. The events are centered on topics of mutual concern for all participants, namely Latin-America. Different language backgrounds are not a concern, but more of a value. In the language cafés students and staff meet to talk and learn about current events meanwhile practicing their spanish or norwegian.

Samfunnsvitern, the largest student-run newspaper at the Social Sciences faculty, welcomes writers of non-Norwegian descent to write in English. Last semester, three of the 25 writers wrote their articles in English, while this semester we have one Norwegian student writing from her study abroad in Paris, another from her study abroad in Saint Petersburg, and another former UiO student writing in English from Germany. The multitude and diversity of perspectives is enriched by incorporating these international perspectives in the newspaper. We have had topics diverging from social entrepreneurship in Uganda, Christianity in the Norwegian secondary school curriculum, to unfair conditions in the textile industry.

Local internationalization is about acknowledging the students’ potential and viewing diversity as a value for student life. Fixating on the differences between student groups and failing to see the common interest between stakeholders will lead to a fragmented student body. This way of thinking creates a stigma towards international students, labeling them as different and incompatible with the interests of national students. Instead, focusing on commonalities such as the interest for Latin-America or the love of writing,can lead to a more fruitful and productive organization.

Often it is the fear of involving the unknown and the foreign in our activities that hinders us from integrating international perspectives and students. Perhaps it is the risk of tainting the local culture with a dash of Mexican Tabasco or a shot of Polish vodka. As they say, mixing Norwegian and international buddy groups could disrupt the process of fresh Norwegian students socializing… If you are not used to spicy food, the first time you eat your Grandiosa pizza with Tabasco, you may be put off. But after a couple of times of trying it, your Norwegian go-to fast-food will feel plain without.