Living Life in the Fast Forward

They used to say «make the most of the life you got.» That was back when you had to settle for the time you were given. Now we can manipulate it.

The weather was cold, the streets were icy and it was beginning to look a lot like Christmas. Not simply due to the lights, the trees, the stars and the angels that frosted people’s homes; I was also informed by the carols stuck in my mind.

To a lot of us, Christmas represents a point of reference. It is announced with an intensity that refuses to be ignored and so we can’t ignore it. The powerful, nostalgic effects of the music and the smells and the decorations all help to lure us back to the past. Our traditions ensure that every Christmas we find ourselves in the very same spot as every other Christmas, with the only variable being a multiple of a year’s time. So, what have we done the last year? What has actually been accomplished? I dreaded the questions. I knew deep down that in 2016, I hadn’t completed or even started a single new television show.

With this mindset, and the family’s valued reputation on the line, I was determined to make a change. This holiday season wouldn’t be dominated by the usual cheerful activities of dressing the tree and opening presents and rekindling with family and old friends. No, I made sure to enter it with a plan. It was time to play catch-up.

My beef was with the streaming industry. Without my consent, it had changed the nature of social interaction. It began as streaming sites first achieved success with movies. The value of on-demand services such as Netflix, Hulu, Amazon Prime and HBO sky rocketed and they wisely turned their revenue towards producing TV shows… a lot of TV shows. With the help of their money and a careful catalogue of consumers’ interests, they have designed TV shows to fit every taste. For the fans of dystopian science fiction, there is Black Mirror which explores the modern phenomena of techno-paranoia. For those who enjoy the beauty of dialogue and everyday life, Amazon has created Crisis In Six Scenes. For love there is Love and Easy, for satire Bojack Horseman and 30 Rock, for drama The Hand of God and Harlot, and for everyone (it seems) there is Game of Thrones.

I realized that this was my Everest, my white whale.

In the end, most people are able to find a show they identify with, and over time it becomes an important part of who they are. People don’t have to struggle with communicating their inner selves anymore, they can merely point to a TV show and say “this is what I like, this is who I am.” If you find someone who watches the same shows as yourself, you can assume similarity, that you have similar taste and similar humor. The streaming industry became a culture and people found each other, formed groups, and fell in love based on their viewing habits (at least initially). Huge complexes like Comic-Con are held together solely by the dedication and love of strangers towards their TV show.

A decision to change

For a long time, I ignored the parade of new shows and I had been treated accordingly. In conversation, I was frequently iced out and ridiculed for my ignorance concerning the political standing in Westeros. At viewing parties, I was the annoying guy asking all the obvious questions. My love life was dominated by women who thought they could change me. They would introduce me to their favorite shows, stare at my face, studying its expressions, with greater care than I dedicated to their show. Ultimately, they were disappointed. I was reluctant and unsatisfactory as an empathetic party in their turbulent virtual world. A woman told me she was intimidated by a conversation without the safety net that mutual admiration towards a TV show provides.

Game of Thrones. Luke Cage. Veep. The Wire. Black Mirror. Parks and Recreation. West World. True Detective. These meant nothing to me and everyday someone made sure to remind me of what I was missing. I told myself “no more” and cursed myself for wasting time in bars, concerts and cabins talking to people who told stories with a complete count of bulletproof characters firmly established at zero. I had lost contact with virtual reality and it was time to do something about it.

It was a daunting task. According to Tiii.me it would take me 9 days, 22 hours and 18 minutes to finish the binge. Taking into consideration the mandatory time spent eating, sleeping and bathroom breaking, I realized that this was my Everest, my white whale. It seemed impossible.

Then a friend told me about speed watching. She told me that after Youtube had introduced a button to speed up their videos she had begun taking advantage of it. I asked her “why?” and she told me she spends a lot of time watching clips on Youtube and listening to podcasts. She was constantly being recommended new things to view and listen to. She showed me a Word document that she had created. It was called Bucket List and it was almost three pages long. It contained four columns with bullet points meticulously listing all the shows, the videos, the discussions, the interviews, and the entertainment that she had been recommended. I could see that she was slowly making her way through it because she had put a line through the completed bullet points. She had started with the first bullet point in the first column and made her way down the list. The amount of structure reminded me of my study plan. She said that speed watching was the only way that she could have any hope of reaching the end. I was inspired.

Youtube is a frontrunner in this style of consuming content. They installed an option under the settings menu that allows the audience to choose the speed of the video. Playing the video under “Normal” speed is customary, but if you speed up every video to “1.5” then you end up spending 40 minutes to watch an hour of content. Most podcast platforms also offer simple features to speed up their recordings.

The trend stops with the on-demand streaming services that provide movies and TV shows. They offer no choice as to the speed of their content. Instead, I had to set up a media player called VLC that could triple the speed of the content. Finally, I could begin to binge.

I decided I would build myself up and gradually increase the speed after I had become accustomed to it. In two days, I was watching and listening to everything in 1.5 times the normal speed. Two more days and I was double timing. While my family put up Christmas decorations, I was consumed by the flashing glow of the computer screen projecting sword fights and romances at twice the speed. I felt like Winston returning from Latvia or a memory drive downloading heaps of information at lightning speed.

And the experience remained the same. Critics of speed watching point to the loss of vital pauses or meaningful looks but I never had to chose between the two. Everything is relative so speeding up the footage doesn’t corrupt the message. The pauses feel just as long since the rest of the content is also sped up. 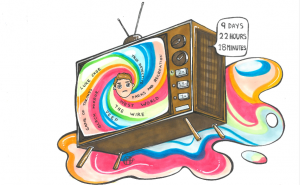 In a week, I had finished Veep, True Detective (only season one of course) and Westworld. Initially my progress was positive and encouraging. I could make it. A few days later, this feeling began to wear off. My body and mind was beginning to tire from the intense consumption of content. This I hadn’t considered. Even though the time was cut by half, the amount of information I absorbed each day remained the same. It was tiring and it felt endless and the speed only added to this feeling. I had a hard time sleeping and my eyes were red and sore. I walked outside and kids screamed and ran the other way.

But worst of all: I had lost all pleasure in watching TV, or movies, or listening to podcasts. It had become a chore. I no longer watched because I wanted to but because I felt I had to. The increased speed made me realize that I was watching TV shows simply to watch them, not enjoy them. Almost two weeks into the experiment and I was done. Slain by a mountain of material. Brought down by a crushing collection of content.

I was halfway through an episode of Game of Thrones when I saw my own reflection in the screen for a second, and considered my decisions. I turned off the computer and made my way downstairs. As I descend, the smells hit me and the sounds too; music, slow oldies pronouncing family and love. Above it, warm welcoming waves of stories and subsequent laughter. It is a calling to which I submit wholeheartedly. It materializes like a cartoony hand made from vapors of scent, and I am lifted, carried through the air, injected with warmth and familiarity, to my family, all sitting around the coffee table, eating fruit cake, talking, laughing. I had missed this.