A few loose reflections around the collective madness nobody will talk about, FTD style. Disclaimer: text may contain nuts and traces of ranting. Go ahead, give it a try, but read slowly and with care.

Ranting with a Cause

Formal thought disorder, or FTD, is diagnosed as a by-product of schizophrenia. It can be a symptom of mania or depression and thus fits this issue of Samfunnsviter’n perfectly. One cannot stay indifferent to mania and/or depression once they’ve become engaged in the topic of collective madness. That is why this article may be read by some as a manifestation of the author’s formal thought disorder. All the better.

It is 2016, about 100 days of it left, and one cannot help thinking that the world’s gone mad. This year will surely go down in the chronicles as the year of utter disasters. For instance, the 2016 has so far killed Alan Rickman, Prince, David Bowie, Gene Wilder, Imre Kertesz, Umberto Eco, Harper Lee and 219 other culture stars, according to The Telegraph. Fun fact: this year seems to have been especially tough for the classic si-fi club: R2D2 builder, the guy in Alf costume, as well as the one dressed as Admiral Ackbar are all gone now. 2016 is a trap! Bernie Sanders did not become the presidential candidate. Breakups got blown out of proportion reaching an international conundrum with Britain leaving the EU and, even worse, Angelina leaving Brad. 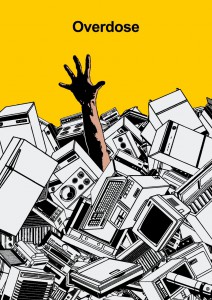 But, in all seriousness, there is an even more urgent madness upon us, of a kind that is underlying everything else and therefore hidden: the collective madness of overproduction, hyperconsumtion, unsustainability, ecological and human abuse, inequality, exploitation… I can go on. And on.

Lack of balance is crazy

An often-made-fun-of author for once made sense saying that collective madness is called sanity. Let’s paraphrase Rilke’s answer he gave Freud in asking: Should we try to take away our collective devils and still hope that our collective angles won’t flee in the process? The answer is yes, because the angles’ wings got all tangled in plastic and pulled their owners towards the depth of our collective insanity. True, there is yin and there is yang, and we need both. But when one devours the other, there cannot be balance. This may sound trivial but our existence, on every level of it, depends on balance. For everything and everyone there is a threshold and a point of no return, and enough is after all enough.

Not to question is crazy

The moment you become convinced that everyone else is crazy, is when you should consider having had gone mad yourself. Or should you? Shouldn’t we contest and question the norm, the sanity, and the way we do things? Where are the philosophers, the Foucaults and the Polanyis of today, when you need them? Can someone please start crowd-funding them asap? Perhaps being a YouTube generation means that the fundamental question “What does it mean?” gets immediately followed by an image of double rainbow all the way across the sky. Maybe that is why it is with such a difficulty we focus on the broader context.

If you attend the ECON3200 microeconomics course at Blindern, you will quickly find out that the representative consumer is assumed to prefer more over less. This is called the greed axiom and it incorporates, well, greed into the consumer behavior. Greed. One of the nastiest qualities known to human kind is an assumption of the most basic economic model taught to students everywhere. As someone could note, it is just a theoretical model that has nothing to do with reality. It is however thought-provoking.

On a weekday’s morning in Auditorium 1 in Eilert Sundts Hus, a single student begins to laugh at this concept, thinking: “Greed? Really? Harsh.” The lecturer utters a weak, nervous laugh in attempt to buy some time and understand what has caused the amusement. He fails and asks: “What is funny?” There was nothing funny about greed being axiomatic to the consumer’s (the economic term for “human”) behavior for the professor of microeconomic theory. For the professor of microeconomic theory, greed looks more and less like this:

In free translation it means: there is no such thing as enough. This gives rise to a problem as soon as we realize that “never too much” axiom would mean self-destruction in real life.

Why is no one talking about this greatest threat to our species: greed, ourselves. Quoting Jay-Z and his memoirs from Paris: “This shit cray!”

In one of the promotional videos for the epic documentary “Human” by Yann Arthus-Bertrand, you will see an older woman. Her name is Dame Jane Goodall and she is the most famous primatologist (an expert on primates) alive. In the video, she’s asked to make a wish. Now, you and I would probably say something like “world peace” or “headphone jack in iphone7” but not her. She goes ahead and says: “If I just had this magic power I would like to, without causing any pain or suffering, reduce the number of people on the planet.” However extreme this might sound, one cannot disagree with Goodall when she reminds us of the finiteness of Earth’s resources. Our greed, she says, is going to cause so much suffering in the future. “This planet can provide for human need, but not for human need”, said Gandhi so memorably and hit the jackpot. Why is no one talking about this greatest threat to our species: greed, ourselves. Quoting Jay-Z and his memoirs from Paris would be counter-intuitive if only it didn’t fit so perfectly: This shit cray!

Destroying the planet is madness. But perhaps it isn’t just greed that cause it. Greed is something active, but being passive and ignorant will not bring the balance to the equation. The consumer society is as far from sustainability as ever. This mustn’t continue. We need to change our axioms and paradigms. Money for example – perhaps the biggest collective madness of all. In itself, it is not an issue, it’s not of value. It’s all in our minds. What gives it value is time, the ultimate currency. And what is time? For each individual, all that matters is their own amount of time, their lifetime. A lifetime is what we give away in exchange for money, so ultimately that is what we pay for everything else. It’s a one-way transaction though, something that everybody tends to forget.

This is an article in a student newspaper in Oslo, Norway. It is not meant to change or revolutionize anything. The point is to ever so slightly poke the reader. Poke you with the altruism stick, since the unsustainability will most likely continue throughout your lifetime, it might not concern you, living in Oslo, Norway, this island so perfectly cut out of the world’s fabric and placed far, far away from the kind of poverty, pollution, and from misery that is to be found in majority of places. It is however indirectly connected to all of these things that are simply the effect of which causes take place around us every day. Poking you on the back of your neck, poking you between your ribs. Can you feel the discomfort? Good – now question the sanity, the madness and question yourself: what of the things you own is a response to your need, and how much of it reflects your greed?