Remembering – For an explainable past and a common future 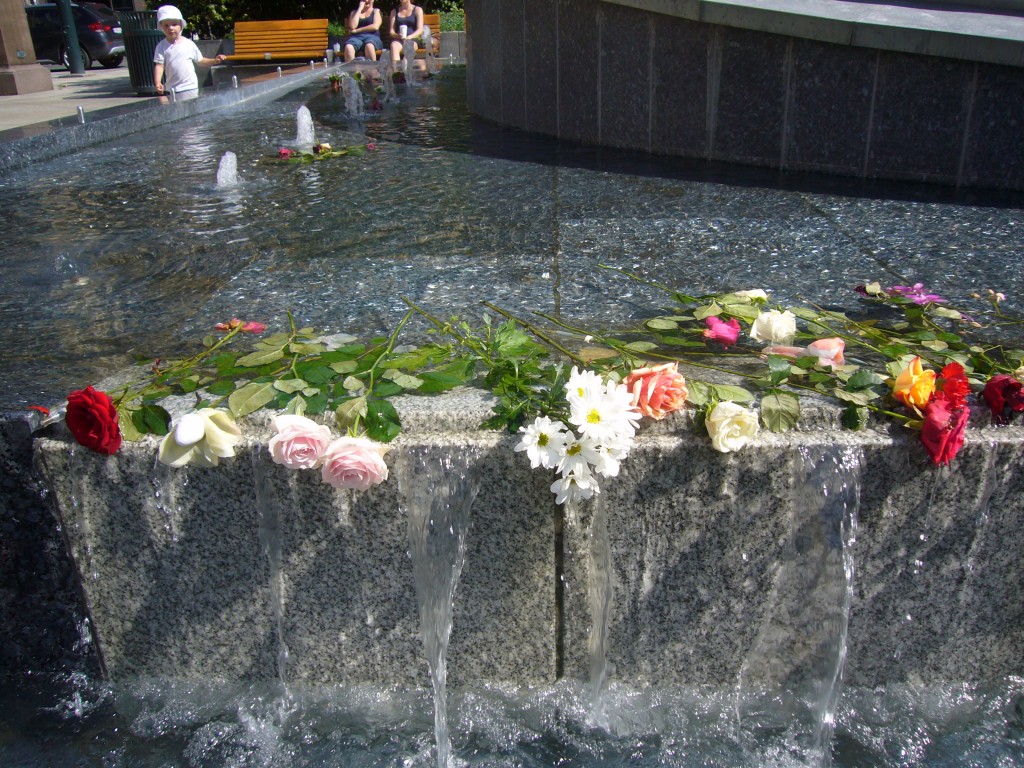 Remembrance is a vital part of moving on. Foto: Cicilie Fagerlid/Flickr Creative Commons

A shattered glass casket is standing by the road. The newspaper of the 22nd of July 2011 is preserved in it. The building behind is wrapped in plastic foil which is used to cover houses under construction. The streets surrounding the area are blocked; only pedestrians and cyclists pass by the scene, which is a permanent reminder of the 2011 attacks by Anders Behring Breivik in the heart of Oslo.

Within the public discourse, as well as in parliamentary debates, the whereabouts of the Oslo attack site are discussed. What is the importance of such a site of memory? What are its implications? Why does it trigger such a difficult and long lasting debate?

Spaces of memory which are established after attacks, inter-state conflict or war are important to remember the victims and bear particular significance for commemoration. The attacks of Oslo shocked Norway, Europe and the World; the Norwegian Society faced severe violence and cruelty within a short period of time and has to live on with it. In order to respect and give tribute to the victims, to give mourning an expression and to remind following generations of the cruelties of the past it is important for the collective memory of a state or community to create spaces of memory. Especially after the act of war, terror or civil conflict collective memory aims for the stabilisation of a common identity.

“Memory is life, born by living societies founded in its name. It remains in permanent evolution, open to the dialectic of remembering and forgetting, unconscious of its successive deformations, vulnerable to manipulation and appropriation, susceptible to being long dormant and periodically revived.” as Pierre Nora writes in his 1989 published article ‘Between Memory and History: Les Lieux de Mémoire’. Hence spaces of memory are not static; they are dynamic and subject to change over time. Due to their normative role and collective orientation they hold political value which makes them eligible to politicisation. This can be critical if the space of memory is, like in Oslo, the site of a nationalist attack. An over-politicisation could lead to either the idealization of the attack itself and on the other hand the main purpose of the memorial side can get lost in the political debate which is just a power play of party politics.

However it is important for states to construct such spaces of memory. Yes, construct. Spaces of memory always produce retrospective perspectives on a certain event or place. They reproduce memories of individuals; cite news agencies or show film sequences or photos of the actual happening. Nevertheless they are constructed even though they might be displayed at the actual site of the attacks. Spaces are to be invented and constantly reinvented. Spaces of memory follow the same route; they try to tell exactly what happened at a certain place, during a certain time. The further the event dates back the more information needs to be added for visitors of such sides to understand the context and actual event.

Currently no one needs to be reminded actively, through explanatory materials at the roadside to know what happened in the centre of Oslo, this applies to both Norwegian citizens as well as people from around the globe, but some years from now it will be necessary. Each state and its inhabitants which have faced conflict, internal conflict/nationalist terror in particular, have to deal with this dynamic. By the time the Berlin Wall fell down no one thought about keeping this part of memory alive, millions were happy to finally be free from political and cultural oppression however nowadays almost each street corner of Berlin reminds visitors as well as residents of the formerly divided city. The memory is kept alive due to the two cobblestones, which show the course of the former Berlin Wall, through pieces of the wall still standing around at some places or due to museums which were established along the former border strip. People felt the necessity to remember their past, because it is a past which influenced the lives of millions of ‘East’- and ‘West-Germans’ until today and their memory found different forms expressions.

A state and its citizens need time to realise what happened, they need time to come from some kind of halt, from mourning; to think back. By the time the question of how could that happen is asked the next question usually follows instantly what can we do that this never happens again? As soon as this shift in the directions of thought has taken place, the state and its inhabitants can slowly move on; they can start thinking about a common future build on a common past. To retain a bridge between the past and the future they have to engage themselves with what caused the rupture in the fragile skeleton of the state identity. As in the human skeleton scars at the bone structure can always been seen, however after a certain time the heeling has gone so far that we can move on.

The shattered glass casket along Akersgata has been consciously left at the side to give a very eminent reminder of what has happened. The casket does not explain the why and the how, but it symbolises the brutality and damaging effect of the 2011 attacks. The reinvention of the space along Akersgata and Grubbegata will take its time and should take its time. Spaces of memory are not just established from one day to another, they have to be invented and leave the space for a constant reinvention for following generations. Whatever the Norwegian Government and the inhabitants of Norway decide how to recreate the space of the attacks in Oslo they have to make the difficult straddle between explaining how the unexplainable happened and how to live on with such a past.