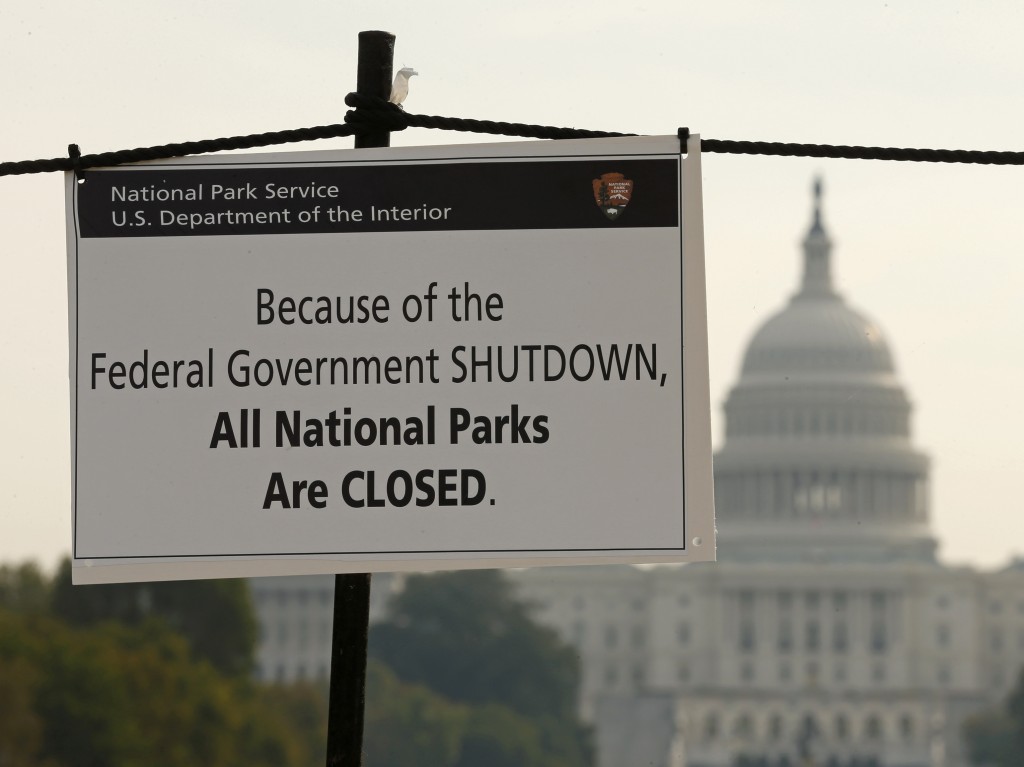 Shutdown: With the the U.S. Capitol looming in the background, a sign on the National Mall reminded visitors that the national parks were closed during the federal shutdown. Photo: Kevin Lamarque / flickr

One of my favorite episodes of The Sopranos is during the second season when Tony’s protégé and nephew, Christopher, gets shot by two of his subordinates, the stumbling, bumbling, wannabe gangsters Matthew Bevilaqua and Sean Gismonte. The episode ends with Tony sitting at Christopher’s hospital bedside quietly muttering to himself, “how could this happen?” This attempt at a power play was a huge deal in the fictional mob world because it displayed utter disregard for proprieties in the apparatus of organized crime, where hubris amongst those with little to be proud of is bad for business.

I am not sure if it is my New Jersey roots getting the best of me, but I drew a sharp parallel between this episode and the shutdown of the United States government at the beginning of October. The political theater picked up where the U.S. election of 2012 left off, with a group of irrational politicians in the populist minority, better known as the Tea Party, bypassing procedural norms and power structures causing the U.S. government to shutdown. As the clock struck midnight and calendars flipped over to October 1st, with the shutdown in affect, people around the world sat at by their TV’s and computers muttering to themselves, “how could this happen?”

In mid-August, a letter to Speaker of the House John Boehner, drafted by North Carolina Congressman Mark Meadows, began circulating around the Congressional office buildings. Elected in November, Meadows – a Tea Party zealot – came to Washington spewing venom for the Affordable Care Act, better known as ObamaCare. “Since most of the citizens we represent believe that ObamaCare should never go into effect,” the letter read, “we urge you to affirmatively de-fund the implementation and enforcement of ObamaCare in any relevant appropriations bill brought to the House floor in the 113th Congress, including any continuing appropriations bill.” After garnering 79 other Tea Party signatories, Meadows and his band of ideological imbeciles started on their crusade.

The continuing appropriations bill Meadows was referring to is – in simple terms – a contract to fund the government. This yearly process requires negotiation between members of Congress and the Senate, who upon reaching agreements on appropriations for programs, send the continuing resolution to the President for signature. This year’s continuing appropriations bill included the funding of the Affordable Care Act (ObamaCare). This piece of legislation serves several functions. In addition to requiring private insurance companies to cover 40 million previously uninsured Americans, it expands Medicaid, a government program set up to cover low-income adults who cannot afford to purchase health insurance.

The Affordable Care Act was set to go into affect on October 1st, the same time as a new continuing appropriations bill to fund the government. For the Tea Party caucus to be successful in their endeavor to defund the ObamaCare, the Democratically controlled Senate and Democratic President would have to sign off on the continuing appropriations bill. This is the same Affordable Care Act that President Obama campaigned on in his latest election victory, and was deemed constitutional by the United States Supreme Court. The Tea Party caucus’s plan was not just unreasonable; it was impossible.

With the reluctant blessing of Speaker of the House John Boehner, the Tea Party effectively took the U.S. government hostage, playing a game of chicken to get President Obama to swerve out of the way first. With both the Republican controlled Congress and Democratic controlled Senate refusing to back down, on October 1st, the U.S. government was shut down, furloughing 800,000 “non-essential” government employees, while asking nearly 1 million more to work without pay.

According to the New York Times, these “non-essential” employees included much of the Food and Drug Administration, which suspended routine establishment inspections and monitoring of imported foods and drugs. In addition to the FDA, the Center for Disease Control furloughed 68% of its employees, while the Environmental Protection Agency was nearly shuttered after 94% of their employees were told not to come to work. It seems some of the only government employees permitted to go to work were members of Congress and the senate. People like Mark Meadows.

The Tea Party Bench has Depth

As the shutdown raged on, members of Congress and the Senate were bracing for the next battle: the debt ceiling. When the United States runs out of money to pay its debt obligations, the President has to legally get approval from Congress to raise the debt ceiling; the amount of money the United States can legally borrow to pay its existing bills. Should Congress balk at raising the debt ceiling, the U.S. would default on its debt obligations, leading to global economic calamity. According to a U.S. Treasury Department report, a default would be, “unprecedented and has the potential to be catastrophic: credit markets could freeze, the value of the dollar could plummet, U.S. interest rates could skyrocket, the negative spillovers could reverberate around the world, and there might be a financial crisis and recession that could echo the events of 2008 or worse.”

An ominous forecast? Not if you are Tea Party punk Ted Yoho from Florida’s 3rd District. In an interview with The Washington Post, Yoho said that hitting the debt ceiling would not be that bad, in fact, it could be a good thing. “I think, personally, it would bring stability to the world markets,” since they would be assured that the U.S. had moved decisively to curb its debt. That comment won Ted Yoho Business Insider’s award for “Stupidest Comment on the Debt Ceiling.”

Yoho believed that the United States Treasury could pull off a maneuver by which it prioritizes payments, therefore paying some obligations here while ignoring others there. According to Nobel Prize winning economist Paul Krugman in his New York Times column, “prioritizing interest payments would reinforce the terrible precedent we set after the 2008 crisis, when Wall Street was bailed out but distressed workers and homeowners got little or nothing.” He continues “We would, once again, be signaling that the financial industry gets special treatment because it can threaten to shut down the economy if it doesn’t.”

Where They Go From Here

Seeing poll numbers largely blaming the Republicans for the shutdown, and with default looming, Republicans swerved first, and conceded defeat to the Democrats. The Affordable Care Act was not defunded, and the debt ceiling was raised. After a 16 day shutdown, the furloughed government employees were permitted to go back to work. It would be foolish to consider this a victory. According to the rating house Standard & Poor’s, the government shutdown cost the U.S. economy $24 billion in lost revenue.

This has been an ugly year for the U.S. With revelations regarding the use of drones and spying scandals, Americans have overlooked what could be the real threat to national security: the Tea Party. According to an article in The New Yorker those 80 politicians who signed onto Meadows’ letter to defund the Affordable Care Act represent just 12% of the 118 million votes cast in House elections in November. This fringe element of Reagan-wannabes robbed the U.S. economy of $24 billion in lost revenue, while threatening the good faith and credit of the U.S. This anti-intellectual group has declared war against reason and compromise necessary in any political discourse.

The movement’s official website TeaParty.org reads on its home page, “ObamaCare is a blemish on our sterling heritage.” This is the same heritage that saw one of the world’s longest running slave trades, Jim Crow laws, legal segregation of the races, most recently torture of detained suspected terrorists, and the list could go on and on. The website continues, “The hideous abomination from hell must be eradicated. We The People must send a clear message to all future generations that we shall not stand for socialism of any kind. Obama Socialism is a political cancer which is terminal to our beloved nation.”

Harkening back to Tony’s question, I too wonder, how could this happen? Draped in a façade of Stars and Stripes, the Tea Party and the U.S. government which enables them represent the organized crime family of Washington, D.C. Extortionists and con-artists who try to keep people from accessing health insurance and threatening to not pay bills create bad precedent. Tony knew that bad precedent was bad for business. How long until the voters realize the same?