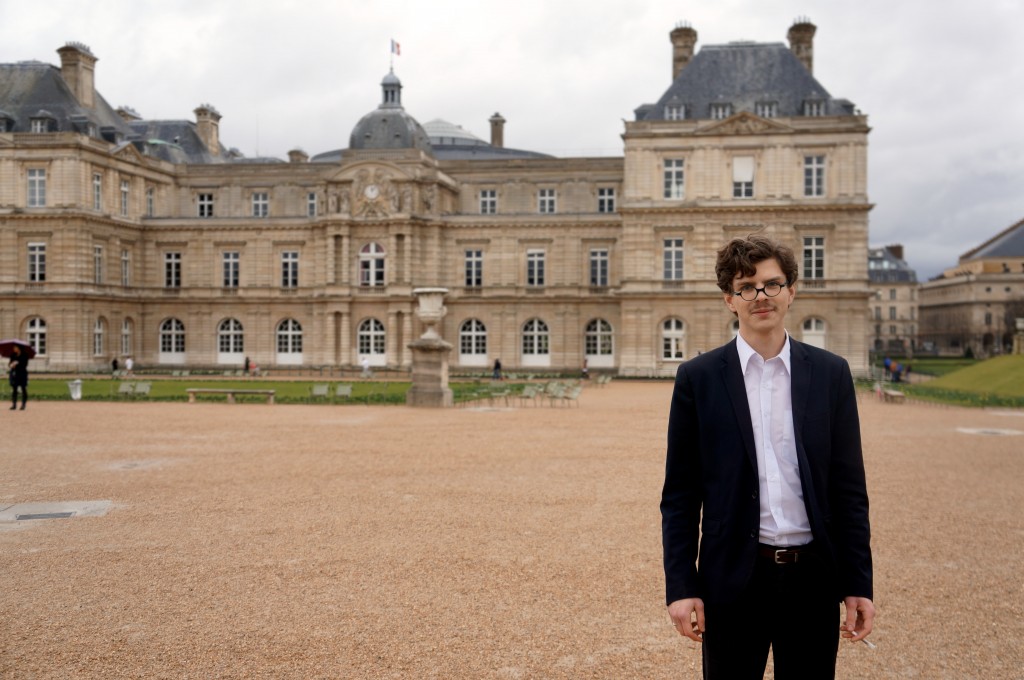 Who is Hubert Camus?

Currently Camus is a master’s student in political science at the Sorbonne-Pantheon. After studying literature for half his life, he decided to take a break from the master in literature and try his hand at something completely different.

– I knew that literature was the most important thing in my life, but wanted to develop another part of myself. Political science had interested me for about two years, and I wanted to build a bridge between the two. Political science can certainly be interesting for writing, and I think the texts I write after studying this will be something quite different than if I had only continued with literature.

At 23, Camus has already touched by a range of genres in his writing. Like many young writers, he began with short stories, before he took on his first novel at the age of 17. Unfortunately, the book was never finished, and he realized that he had to write about a subject he knew and loved in order to finish it. Around the same time he was introduced to the writings of philosopher Jean-Jacques Rousseau, and he became the inspiration for his next novel. Only 19 years old he began his second novel, and less than two year later “Three years with Rousseau” was published.

The book looks into the last three years of Rousseau’s life seen from the perspective of a young man from the French bourgeoisie in 1775. The protagonist, Nicodème, is 17 years old and wants to have his own experiences. In the eighteenth century it was common for young men like him to have private tutors, and to be shaped by a certain idea of ​​what was seen as appropriate. Nicodème violates this, and decides to experience the world for himself.

One night he goes to the theatre and watches a play by Rousseau. He decides to learn more about him, and that is the beginning of a friendship. It is important to note that Rousseau is at the end of his life, while Nicodème is very young and hungry for experience. Nicodème’s admiration for Rousseau develops into a love beyond the one between teacher and student. Rousseau is like a father to him, and it is thus an impossible love.

It is evident that Camus shares some common ground with his protagonist Nicodème when he talks about his inspiration Rousseau. A man who has understood everything, as Camus puts it.

– I chose to write about Rousseau because I love him and want him to get more recognition. His way of seeing society and human nature was original and brought something new to the public debate. He wrote only one novel, and it is a masterpiece. His poetry is wonderful, and the plays likewise and also he revolutionized music.

It is not only Rousseau’s philosophy that appeals to Camus, but also the way he chose to live his life.

– He was very different from other philosophers of his time. Rousseau was not concerned with wealth and fame; he only wanted a quiet life with his wife. For me he is the only real writer of his time, says Camus.

The aim of the novel is for people to learn about another aspect of Rousseau. The novel is historically accurate, but the character Nicodème and the relationship between him and Rousseau are fictitious. There’s a lot of thought behind creating a credible description of Rousseau’s life and Camus had great pleasure of discovering small details about his hero.

– In the book there are some very specific details about Rousseau, and people who are familiar with him will be able to discover that. Nevertheless, it was important to me that everyone would be able to get something from the book, and hopefully have the desire to discover Rousseau for themselves.

The first version of “Three years with Rousseau” was something quite different than the book that ended up being published. In the first version Nicodème was not in love with Rousseau, but a young girl. The publisher saw something in the script that Camus was not aware of, namely that the strong fascination Nicodème has for Rousseau is so intense that it could be an expression for a romantic love. With that in mind, Camus rewrote the book knowing that Nicodème was gay.

– Even though homosexual relationships has been very evident  everywhere in art over the last ten years it was not deliberate on my part to use it as inspiration. I wanted to describe a close relationship between two people, and after discussions with my editor, I realized that it might be interesting to change it, says Camus.

French literature has traditionally been inspired by texts from ancient Greece, and Camus’ description of the relationship between teacher and student can be said to have similarities with pederasty from ancient Greece. Pederasty is a form of homosexual relationship between older men and young boys outside the family in the ancient Greek society. These relationships seem to have been common and somewhat accepted at the time as a kind of exalted friendship, where the educational and intellectual part was just as important as the sexual one.

Even though Camus is proud to have published a book at such a young age, he would have changed everything if he were to write it today and probably not even publish it.

– I was so young when I wrote that book, and I see now that there are several things that would have been interesting to include. I would for instance have incorporated some historical points, the way the book is only focus on the relationship between Rousseau and Nicodème without taking into account what is happening in Paris at the time. When I read the book today, I would not have published it.

The most important thing for Camus is that he is proud of his work when he completes it. Writing is something he does for himself, and if he does not regard something as interesting for others he will not share it with the public. .

Camus believes that reading good literature has been very important to develop his own authorship. Jean-Jacques Rousseau is his most crucial inspiration, but also within his own family he has a great writer and philosopher to take after. Albert Camus is known to most people as Nobel laureate in literature, and especially for his contributions to absurdism as a direction in philosophy. Albert Camus was active in the French Resistance during World War II, and among other things he wrote for the underground newspaper Combat.

Young Camus is also very much politically engaged, and could very well imagine working as a journalist like his great grand uncle. He has already written for literary magazine, and envisions a combination of journalism and literature as an ideal career. However, it is difficult surviving as a writer alone in a city like Paris. His first book was published by Kirographaires, a publishing house that opened up in 2010 wanting to give young writers a voice in French literature. Unfortunately they went bankrupt just three years later, and Camus is again looking for a publisher.

– It is very difficult to be published in France. The publishing houses don’t focus on young writers because it’s harder to sell something unknown, says Camus.

For Camus there has never been anything else than writing, and despite the fact that he already has long days with both work and studies he continues on with his greatest passion.

– Even when I tried to do other things, writing was always there, and I cannot imagine my life without it. I want to write and be dedicated to the art all day long, but of course it’s difficult to survive as a writer.

Camus has no doubt that it is important to continue believing in yourself despite the fact that you will encounter resistance as a young writer. His best advice to others in the same situation is to continue on.

– The most important thing is to enjoy writing and never give up. When I get a negative response from an editor I get annoyed, but continue to work. If you think what you do is good you should never hesitate.